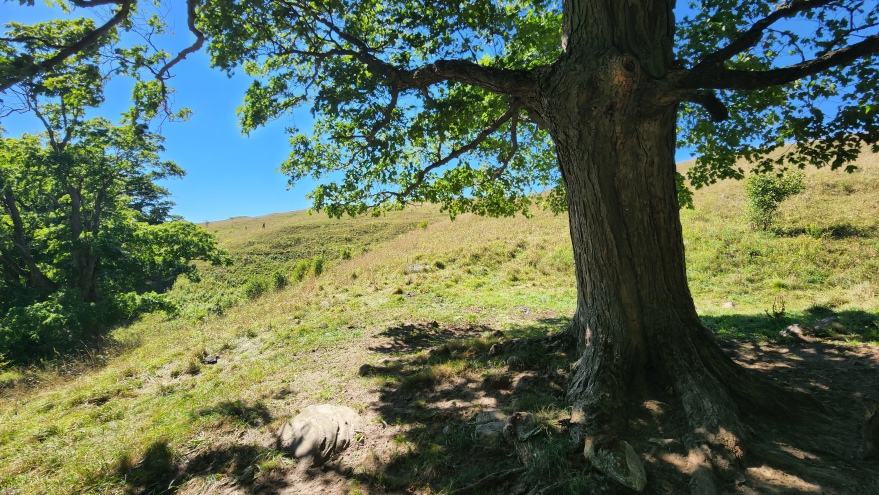 Day #17: Twila connected us with her friend Colleen, who we met up with on a dead end road where there was barely a shoulder (on 8 Sideroad at 2nd Line E). She took us back to Mono Centre to pick up where we had left off. We saw the windmills on the horizon along the drive, and again from the trail.

The day was easy throughout, with the exception of a couple big climbs. Without question, the highlight of the day was seeing dozens of monarch butterflies flitting about at the edge of a field that we passed through. I think it’s fair to say I saw more monarchs that day than I had seen cumulatively over the course of my life previously.

On a break shortly after, we got to dip our feet in an icy little stream that passed under a boardwalk, with a sprawling willow standing over it for shade. We moved pretty fast through easy terrain, even though my knees were slowing me down. Our hike started at 8:15 AM and we finished our 22.87 km day at 4:30 PM.

Day #18: After picking up a coffee, we went to Centre Road to meet trail angel Ian. He dropped us off at 8 Sideroad, and we started our hike. While we sat on a bench to have breakfast at a rural intersection, we met Iver, a runner, and his dog Cedar. Iver is running the Bruce in sections with a friend of his. While we were mid-conversation with him, a pair of hikers – Homer and Maria – came up to us and told us they are a brother-sister duo who are hiking the Bruce in sections. They were part way into a 32 km day that she joked would kill her, and he’d have to bury her in the cemetery in Lavender where they’d parked.

It was another relatively easy day, with a couple of big hills in the mix. Most memorably, there was an unimproved road (off of 20 Sideroad, I think) that was just more and more hill after every crest and turn. We also noted a short stretch of slightly more technical terrain between Prince of Wales and Centre Road. The day was 23.8 km, which we completed in just under 9 hours. We took long breaks at a rock formation, a stile, and a big old maple tree surrounded by cow patties on a lovely bit of farmland.

Later, we went to park at a trail angel’s house for the night, and learned that the farmland with the maple belongs to her brother, and that her and her son Henry the Hiker (@henry_thehiker) are developing a piece of land just off of the trail for hikers to camp on. I watched a murmuration of starlings flying around and above the cattle as the sun was going down before we filled our water jugs in the house, and finally went to sleep in the van.

Day #19: After meeting trail angel Jenn at 9/10 Sideroad, we started the day on Centre Road. We did not love the seemingly endless unimproved gravel road, but we did chat with a couple of people there. The first was a man with two dogs, who was very fond of the 40 kilometres of the Bruce that were ahead of us. The second was a woman named Wendy, and her dog Norse. She showed us the scars on her legs from the surgery she had after sustaining injuries on a trail in Sedona, Arizona. I worry a lot about getting injured on trail, especially with the type of loose rock underfoot that caused her fall, so the story has haunted me a bit since. We also met a farmer who mows the cemetery and who had met Leon, the German 18-year-old we had hiked with a few days before. The intersection after that cemetery in Lavender marks the boundary between Dufferin Hi-Land and Blue Mountains.

We passed the pond in Noisy River Provincial Park that Jenn had suggested we might take a dip in, but it didn’t look too inviting when we finally got down to it, so we opted for the creek instead which we came to shortly after. Just a few steps down from where the bridge crosses, we put our feet in for a soak. There was also a boardwalk with several short sets of stairs where we stopped because mom felt hot and exhausted. At that point, she felt she wasn’t sweating, which worried me.

Noisy River was pretty easy throughout, with the exception of some rocky bits, and the climb out of the valley. Afterwards, we came through several overgrown areas, which I was glad weren’t wet like that stretch of trail next to Highway 7.

At the end of the day, I spotted the van before mom did. She was walking ahead of me, and had continued to dutifully follow the white blazes in the wrong direction when we had to take a short jaunt down a side trail to get back to our parking spot. We drove the van to a nearby chip truck so I could get the poutine that I’d been craving for days, and also went to the convenience store next door to get a couple of ice cream treats. Then we spent the night across the road from Jenn’s, and used her exceptionally nice outhouse.